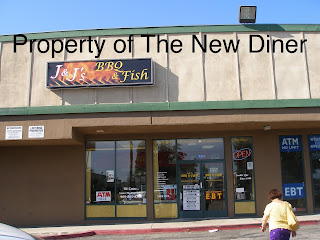 I read yesterday, that J & J's BBQ & FISH had been opened for a little over a year, I was very surprised. What took me so long to know about a BBQ restaurant! At first I thought it was the JJ's Fish and BBQ in Ontario, reopening. But they are different names, J & J's compared JJ's. 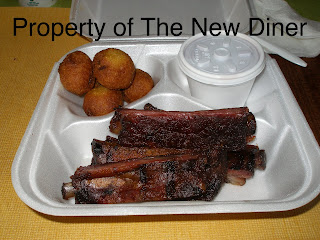 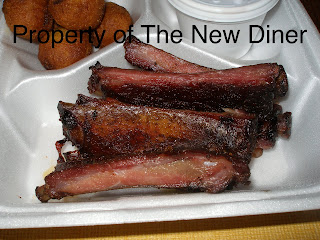 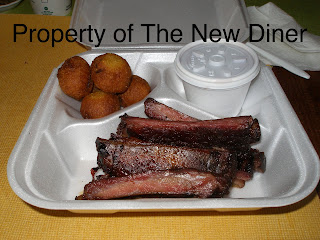 I wasn't that hungry and decided to get the spare ribs lunch, $7.99, with double hush puppies. They have a large selection of sides on the menu, but some sides are not available all the time. I got about five St. Louis style spare ribs in my order and the guy, who I believe is the owner, gave me a rib to try, while I was waiting.

The ribs were a bit small and had very little meat on them. Yes, I know St. Louis style ribs, mean the tips are cut off, but there should be more meat on these ribs. The ribs were also a bit dry. They had been sitting in a warmer for too long. A pit master told me, when you have a BBQ restaurant, you are going to get ribs that need to be thrown away because they dry out and/or have been sitting in warmers for too long. The ribs had a nice smoke flavor, they use hickory and oak, but I just couldn't get over the dryness of the ribs.

Service is good. But when I first arrived, the guy just went about straightening up. He didn't acknowledge me or anything. But once I was ready to order, he was nice.

About The New Diner

All images, photos, pictures etc are copyright by The New Diner and/or the owner listed with the picture. The images on this site are for on-screen viewing only. All imagines may NOT be copied, reproduced, manipulated, or used in any way for personal or commercial use. That means you people from Yelp, STOP STEALING my photos!!

Updated Reviews: I will go back to restaurants that I have already reviewed. At times, I went back to try another item on the menu, and other times, to get the same meal because I loved it so much. Most of the time, a revisit was worth the trip. But, sadly, I've had to report the quality of the food or service has gone downhill since my last visit.

Moved Restaurants: This means a restaurant has closed down at the listed address in a review, and has moved to another location. If I reviewed the new location, I will post a link on the old location. I will keep this list updated as possible, but, honestly if the restaurants that moved were bad, I'm not going to waste time updating where they moved to.

Closed Restaurants: When a restaurant has the label, Closed, that means the restaurant at the address listed with the review, is now closed. The restaurant may have moved to a new location or changed names.